For questions or more information please reach out to us at info@gatewayassociation.ca, or call us at 780-454-0701. 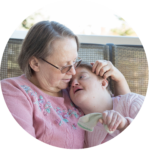 “I started having trouble with supports and services with my daughter Rochelle. I went to Gateway Association for support and attended one of the Families Forward meetings. It was there I connected with two amazing people who helped me advocate for what I needed for my daughter.”