In February of 2014 Gateway Association kicked off Edmonton’s first cash mob campaign of its kind, celebrating inclusive employers – those who hire inclusively by employing people with disabilities in meaningful, paid roles.

We have borrowed the cash mob idea from the Buy Local movement, and applied it to the We Belong movement – the pursuit and support in communities for meaningful, paid work opportunities for people with disabilities.

Throughout the campaign, we will periodically “cash mob” businesses that hire inclusively in and around Edmonton. The goal of the campaign is to reward forward-thinking businesses and to inspire others to consider hiring inclusively.

Support continues to build in the community for our inclusive employment cash mobs. Stay tuned for our next cash mob location!

Gateway Association does not profit from cash mobbing. All proceeds go directly to the business as a reward for hiring inclusively.

On December 3rd, 2017 Gateway partnered with two other organizations across Canada to host the first ever “National Cash Mob” 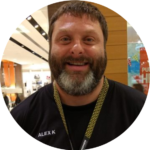 Alex started working for the City of Edmonton in 2014. He is now thriving doing administrative support for the Communications and Engagement department. Alex also recently joined the Gateway Association Board of Directors.