Implementing Equity, Diversity and Inclusion (EDI) in a work place specifically starts with leadership. The tone and example that leaders of communities and organizations set is essential. Remembering that disability is the largest minority group when thinking about EDI is also essential.

This year Capital Region Mayors pledged their commitment to Diversity and Inclusion in their communities and workplaces. The pledge videos were sponsored by Pan Disability Connection and Baat Cheet Films. 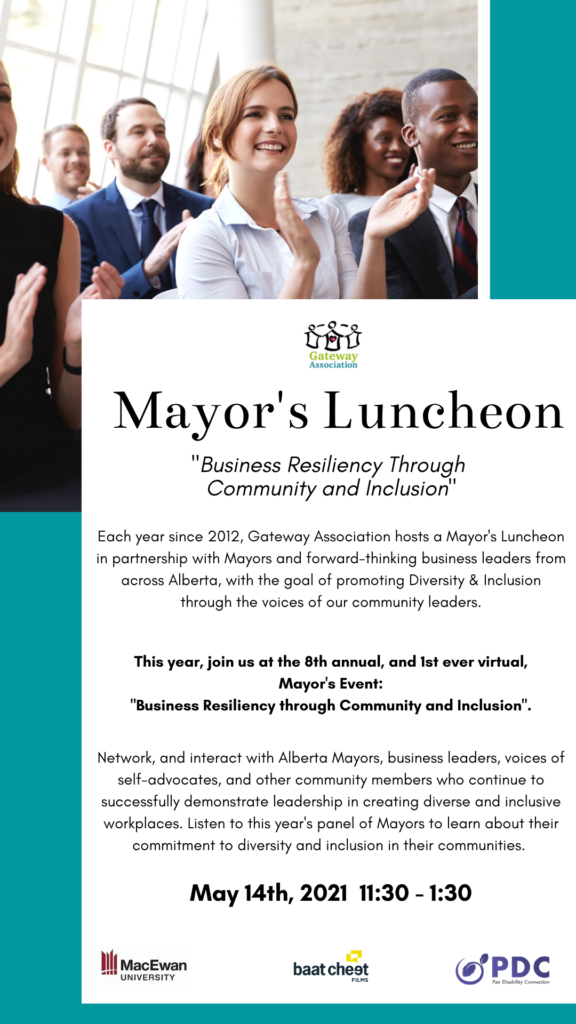 Chantelle will share The Brick’s commitment to Diversity & Inclusion and their inclusive recruitment and workplace culture strategies they use.

This Panel of Mayors will discuss their thoughts on how to continue to support more inclusive communities and workplaces and they will share some of the ways this is being done in their own communities including any new initiatives they implementing or planning.

For more information please do not hesitate to contact Renate Burwash, Director of Diversity and Inclusion at Gateway Association:  renate@gatewayassociation.ca

Hear from our Keynote Speaker:

Mark Wafer is a disability rights activist. Until recently he was the owner of six highly successful Tim Hortons locations in Toronto. During his 25 years in the business Mark employed over 200 workers with disabilities in all areas of the operation including senior management.  At any given time approximately 17% of his workforce identified as having a disability.

Mark is an internationally recognized expert on the economics of inclusion. He is an advisor to governments around the world and is responsible for Canada’s national disability employment strategy.

Mark has received many awards and recognition for his work most notably from her majesty,  Queen Elizabeth II.  He was inducted into the Canadian Disability Hall of Fame in 2014

Our Mayors Luncheon has grown into a must-attend event for politicians and business leaders from across the province who see the value in building diversity into strong hiring strategies.

The theme for #MayorsLunch2018 is Leaders of Diversity and Inclusion.

This year we are excited to welcome keynote speaker Neil Hunter, a Director at Deloitte LLP, which is one of Canada’s leading professional services firms.

Gateway’s Mayors Luncheon, in its sixth year, has grown into a must-attend event for politicians and business leaders across the province who see the value in building diversity into strong hiring strategies.

Gateway Association is proud to host #MayorsLunch2017 in partnership with Prospect. Gateway works with job seekers who live with disabilities and employers that value diversity to build and support meaningful, paid employment relationships. Prospect helps people who face barriers to employment overcome those obstacles by supporting individual skill development and creating workplace capacity. We’re excited to work together as like-minded social service organizations to keep building capacity in community toward belonging for all people.

The topic at #MayorsLunch2017 will be: Navigating Complex Relationships in Business – How to work together to build successful diversity strategies.

This year we’re excited to welcome keynote speaker Maureen Halldorson, RBC’s Regional Vice President, Financial Planning, who will talk about RBC’s values and innovation around inclusion and diversity and how to build diversity into a strong business model.

We’re also pleased to celebrate the City of Edmonton’s leadership in this area with its pioneering Abilities@Work program, presented by Mark Farr, the City’s Diversity Recruitment Consultant, along with a union representative, to talk about how municipalities and unions can work together to achieve success with diversity and hiring.

We hope to see new and familiar faces at #MayorsLunch2017!

Thank you to our wonderful sponsors for helping make this happen: Prospect; City of Edmonton; City of St. Albert; Home Depot; and Ready, Willing & Able!

Our theme this year is: “Achieving Diversity Through Great Partnerships.”

Keynote speaker Mike Bradley, Mayor of Sarnia, Ontario, challenged the mayors of all the municipalities across the province of Ontario to get every person who lives with a disability working in their communities. He will share the ins and outs of how building and leaning on good partnerships is the key to success with diversity in business, and how mayors can play a key role in that process. “We don’t hire, but we create the culture,” he says.

Guest speaker Michael Liber, owner of Baseline Dairy Queen in Sherwood Park, is a huge champion of diversity who believes wholeheartedly in inclusive hiring and trains managers at Dairy Queens across Canada on how to do it well.

Guest speaker Corbin Bourree, managing director of Spud.ca’s Edmonton shop, is proud of the organic online grocer’s diverse workplace culture, one the company has spent much time and energy nurturing, of which inclusive hiring is an important part.

Luncheon: The Business Case for Inclusion

Discover how your business can tap into a $26-billion market that is often overlooked. Keynote speaker Mark Wafer, a national disability advocate, will share how he boosted his bottom line by championing inclusive hiring. Wafer owns six Tim Hortons locations in Toronto. Over the past 20 years, he has hired 107 people with disabilities.

Workshop: The Approach to Business That Works

The workshop offers strategies and best practices to employers interested in inclusive hiring. Facilitator Mark Wafer is on the federal government’s Panel on Labour Market Opportunities; is cofounder of national organization Canadian Business SenseAbility; and was recently inducted into the Canadian Disability Hall of Fame.

Are you a business that wants to be a leader in inclusive hiring?  Come to learn more at our annual St. Albert Mayor’s Luncheon, with special guest, Mayor Nolan Crouse.

For alternative payment arrangements, or to notify us of any special dietary requirements, please call Gateway Association at 780-454-0701.