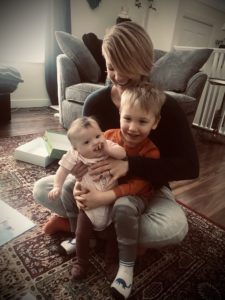 I don’t know how I’m finding the time and energy to write another post, but, here I am. Parenting two is a whole other level!

My first offering to you was the birth story of Jolie Grace, our chromosomally enhanced beautiful baby girl. It was the story of finding strength and light after receiving an unexpected diagnosis of Trisomy 21 and of how all our worry and fears melted as soon as we held our healthy baby girl for the first time. I had wanted to reach out a hand to other parents who may have been in a similar place as we had found ourselves, a place of unknown and so many questions, because I remembered the person who’d first held their hand out to us in our time of need.

This offering marks the beginning of a journey in acceptance and celebration of Jolie’s diagnosis. I’m going to tell you about how “normal” life has been, about how all of the things I initially imagined couldn’t happen because of Down Syndrome, happened. This will also be the story of doing what you have to do because there is no alternative. You parent the child you have right?

I had been happily posting about our daughter on the socials, having joined a couple of really wonderful Facebook groups and followed a number of Instagrammers of kiddos with DS. My friends and extended world community began sending me beautiful messages sharing their stories of people they know or have known with DS. I was enjoying such touching conversations I never imagined having before, many with the very people I’d known for years. I began seeing everyone in a new light, I became less judgmental in my inner thoughts, I absolutely cared more about the things that mattered and far less about the things that didn’t. Every day I felt stronger, and with the strength came this feeling of ease and total, utter, NORMALCY.

Once in real life, I had an encounter that will stay with me always. At my favourite cafe, I was visiting with the very person who’d held out her hand to me at the beginning. Jolie would have been 2 months or so and of course, new babies are like people-magnets and everyone wants to have a look. It was one of my first experiences out in public where I didn’t know everyone in the room. I felt my apprehension at first as I allowed the first stranger to peek at my sweet sleeping baby, but it quickly faded as the reaction was innocent and lovely, “Oh my! So precious and beautiful!”. I whole-heartedly agreed! As I was gathering my things to leave, a family at the table behind us stopped me and one of the mothers asked, after they all doted on her, “She’s absolutely beautiful! Does your daughter have Down Syndrome?” My breath caught a bit, “Yes she does”, “Congratulations on the birth of your beautiful daughter! My brother has DS and he is the light of our family”. I am pretty certain I welled-up and tried to blink away the big fat tears. At that point, the mother’s mother grabbed my hand and held my gaze and said “My son is the best thing that has ever happened to me. I know what you’re going through right now in this early time, what you must be feeling, and I want you to know that you are so lucky and she is going

to bring you more joy than you ever imagined possible. You got this. She is beautiful”. I cried all the way home.

I struggle to find a word to describe our life in those first few months as anything other than normal. We settled into a lovely routine, even with all the extra checkups with doctors and specialists.

The first 2-3 months with Jolie were easy. I’m not even joking. Everything everyone had told me about baby #2 was just not a thing for us. For example, she slept through the night right from the start! This was wonderful for numerous reasons (I was getting so much sleep!) but namely wonderfully serendipitous because our 3 year old son Jules was not yet sleeping full nights in his own bed. He could still crawl in with us without disturbing his sister who slept soundly in her bassinet. I think that was the most important thing for Jules – to know that he was still our #1 kiddo and so he didn’t feel rejected. Jolie slept so great that during the days Jules wasn’t in daycare, while she napped I could devote much of my attention to him. We went on playdates and play drop-ins at a community hall where I could visit with parents, Jules could run around and be as social as he needed to be, and Jolie mostly slept. I felt so balanced in those first few months, like I was on top of this parenting x2 thing. I took my moments to explain to Jules that as Jolie grows she’ll need help from her big bro to learn all of the things he was so good at. I’d encourage him to engage with her and get her excited about the day she’ll be able to smile at and eventually play with him. When I’d do diaper changes, I would call on my Diaper Boy for help. And while sometimes he would have his freak-out moments, wanting her to pop back into my belly, more so he has been really so sweet with her, kissing her and holding her hand, touching her tiny ears (he has an ear thing). My husband Jesse and I have shed many happy tears watching our son and daughter connect.

Jesse owns a sound and light production company and produces all kinds of events mostly in Edmonton and surrounding areas. The nature of his work means he’s away many nights and on most weekends, and so I was often solo parenting. It was not too difficult when there was just one, but things definitely levelled up once Jolie arrived! I started referring to it as “adventures in parenting 2” because every day was different from any other, all the while still feeling like a pretty comfortable routine (eventually). There were some tough times, but we got through them and I felt mostly good about my approaches to conflicts with Jules as he fought me every step of the way at bedtimes and nap times. I explained that we were all learning how to live together and that we are on the same team. At 7+ months in, as I write this, he still needs reminding of the team playing, but I reckon that is quite perfect for his age.

January is when things began to shift. At first she slept through the night so wonderfully; however, around this time, she began to wake up often, nursing around the clock, and sweating while nursing.

One thing about Jolie is that she was born with a heart defect, one that is more common than I thought in not only people with Trisomy 21, but in general. At our 20 week ultrasound it was discovered that there was something wonky with her heart and we were booked with a fetal cardiologist to get a closer look. It’s hard to believe they can find abnormalities so small – a heart at 20 weeks gestation is so tiny, let alone a hole in it! She was diagnosed with Ventricular Septal Defect (VSD). As I explained in my last story, there was nothing we could do about it until after she was born and we declined any further testing. The pressure of breathing after being in utero changes and regulates at about 4-6 weeks postpartum and this is when babies will start to show signs of “heart failure”. Heart failure sounds so scary, trust me I know! But all that means is that there are signs if her heart is struggling to pump enough blood and there are things we can do to help them through it until such time as surgery is required. Oftentimes, the hole closes on its own or gets so small that it poses no concern.

At her first cardiologist appointment postpartum, the scans revealed she actually had two holes: VSD being the more significant one, and a small Atrial Septal Defect (ASD). It’s hard to believe that a heart can function relatively well despite holes in it. I have grown a whole new appreciation for the human body! From the moment she was born and even after that first specialist visit, I clung to the hope that the hole(s) would close on its own. There was always that possibility! I wanted it so badly. But, after her first major growth spurt at around 3 months or so, we noticed that her growth was slowing down. By January, it was a snail’s pace. Babies with Down Syndrome tend to grow at a slower rate than do typical babes, but Jolie wasn’t growing at all. She plateaued. Every scan she’d ever had postpartum showed no change to the size of her holes. It was around that time when I realized the hard truth.

I was scared. I was scared for my daughter and the thought of her not just “going under the knife”, but being intubated and on a pacemaker – hooked up to so many machines – because they would have to stop her heart, that her blood would be replaced with somebody else’s, the pain she’d undoubtedly feel afterwards (if all went well). There was a 99+% success rate for these types of surgeries, but I only saw the things that could go wrong and I didn’t want anything to happen to my child. I never felt the mama bear in me more than I did having to think about that surgery.

But, I didn’t have time to sit paralyzed in fear.

My daughter needed me to be her mother and I wasn’t about to let her down. With the kind of fervor I didn’t know I had, I began paying much closer attention to everything and communicating my observations in between visits with her cardiologist. I was very much learning how to trust in my own instincts and doing what I had to do in order for Jolie to thrive. I stopped comparing her growth and progress to other babies her age and I celebrated her milestones as they happened, at her own perfect pace. Even though Jolie Grace’s little ticker was working overtime, she learned to smile the biggest smiles (especially for her big brother), laugh, jump in her Jolly Jumper, roll and roll, sit up, stand up and balance with assistance, eat food, babble, and she sure got cuter and cuter.

Thinking back on the past few months while writing this story, I wish I could tell myself “Jacquie! Again! Stop worrying! EVERYTHING is going to be alright, even if “alright” looks different from how you’d envisioned it”. Basically the same thing I wish I could’ve told myself back when I was pregnant. I suppose, don’t we all wish we could do that for one reason or another? 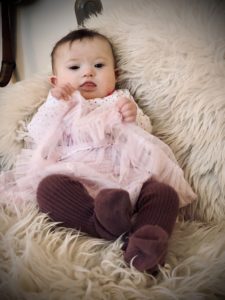